There’s been a lot of talk recently about a MacBook Touch – a Mac laptop with a touch screen, perhaps in tablet form, but each time I read a speculation like this I wonder – would a MacBook Touch really be useful?

I sit at a desk, (or on a couch sometimes), and work on my MacBook Pro.  I spend most of my time coding in PHP, Javascript, HTML, or CSS, and I use the trackpad to control the mouse.  This way I rarely have to move my hands, (I know it sounds lazy).  I find that I can get things done fastest working like this.  If my computer were to have a touch, (or multi-touch), screen I would have to lift my arms, touch the screen, then find my position again on the keyboard.  I know it would be fast, but multiplied by a thousand, (or however many times I interact with the mouse), per day it would take a lot of time.  Really, if I can drag something across the screen by moving one finger five cenimetres on the trackpad, why would I involve my whole arm in dragging something twenty-five centimetres across the screen?  Call me lazy, but it seems like a lot of unneeded work to me.

Another more minor issue would be the dirty, dirty screen.  My screens, (on all of my computers, not just the MacBook Pro), get pretty dirty, I they would probably get pretty disgusting if I was touching them all of the time, instead of just sometimes as I do now.  True, I could, (and would), clean the screen, but it’s not just a one and a half second wipe like on an iPhone or iPod Touch – I imagine that it would get annoying after a while.

A tablet form factor would reduce these problems.  I have never owned a Tablet PC myself, but the demos I’ve seen were pretty cool and I can see how they would be useful in some situations, but for everyday computing I don’t really see how the added cost of a touch screen would give a MacBook Touch any added value.

Of course, they usually seem to figure out how to do it down there at Apple, so if they are actually working on a MacBook Touch, it may be excellent, we’ll have to wait and see.

Last weekend I had the opportunity to visit the Ice Hotel Québec-Canada. I had heard that the ice hotel was amazing but wasn’t prepared for what I saw. The things they have done up by Québec with ice and show are incredible.

Now I’m going to let the pictures do the talking.

Over the weekend I took a little trip to Toronto and Niagara Falls. To get there I rented a car, (pictured right, it was cheaper than the train). The photos aren’t that great, I forgot my camera so had to make do with my phone. After reserving the smallest car possible online with Hertz I showed up and was told that the smallest they had in was a Dodge Magnum. That’s like a free upgrade to business class on the plane!

Once I had my great car I took the weekend to enjoy it, and the pleasures of Toronto and Niagra Falls. While driving though, I noticed several things about the Dodge Magnum that I would do differently and thought that this car is an excellent example of real-world design, (as opposed to the web-world of design I usually am immersed in), but had a few things that could be changed.

If you’ve seen a Magnum you probably already know the good. This car looks awesome. Whoever came up with the look of this car is a genius. They’ve taken a station wagon and made it really cool. My neighbours and girlfriend thought it looked like a mini-limo. The car looks fast, powerful, and aggressive.

The interior is great too. It’s spacious and has lots of storage space. My SXT, (not the top-end model), had a pretty decent sound system as well, and I could hook up my iPod to it.

Even though the SXT’s 250 horsepowerful engine is much less powerful than the top of the line HEMIs it provides enough power for highway driving with a slight load.

What I would change 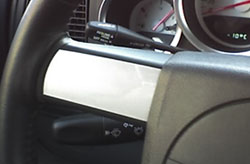 The first thing that I noticed when I started to drive was that there is an extra lever on the left side of the steering wheel where I only expect to find the turning signal control, (pictured left). This is the cruise control and is quite annoying until you get used to it. I couldn’t see either of the two levers while driving and don’t feel I should have to look down to signal, and every time I tried to turn I would try to signal with the cruise control. When driving on the highway it was handy to have the cruise in such an accessable place but I suspect most people will spend much more time in the city than on the highway and will want the cruise put somewhere else.

When trying to do a shoulder check on the driver’s side of the car I found my view was mostly of pillars and I didn’t see much road, (pictured right). Visibility in general in the Magnum is not as great as it could be, however, this is a large car and with larger vehicles come larger blindspots.

One other thing I noticed about this car, although this isn’t a design issue, is the fuel economy. The SXT is powerful, but not extremely powerful, however it still uses a lot of gas. I barely made it from Montr&eagueal to Toronto on a tank of gas, which worked out to something like 514 kilometers on 63 liters of gas, not that great. I can’t imagine how much gas the high-end HEMIs must burn.

Overall, the Dodge Magnum is a great car, however I wouldn’t buy it because of the odd placement of the cruise control, the bad sightlines, and the bad fuel economy.